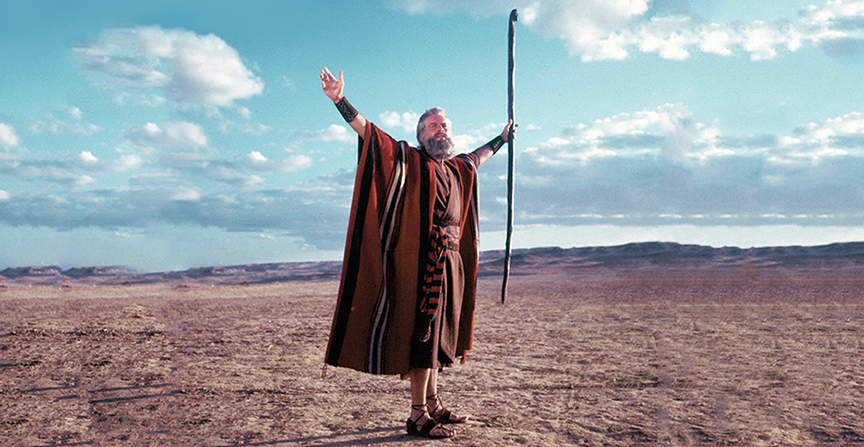 My best friend Dani Roth asked me this excellent question, which I never heard asked even by adults:

“Why did Moses need to wave a staff when announcing the plagues? Couldn’t he just announce the plagues, since it was God who really made the plagues?”

Once I heard Dani ask this, I said “That’s a great question!” I immediately started thinking and researching the Torah for clues. Dani is correct: God has no needs, so whether Moses waved a staff, or simply announced to Pharaoh the next plague, or even if Moses did nothing, God can cause the plague to start independent of Moses’ actions. Furthermore, what difference is it to Pharaoh and Egypt if they see Moses waving a staff or not? The plague alone is the impressive event!

To answer Dani’s question and learn the significance of Moses’ staff, we must study the first instance of the staff found in Exodus 4:2 during Moses’ first prophecy at the burning bush on Mount Sinai. During this prophecy (which commenced in chap. 3), God outlines His plans to send Moses to address Pharaoh to answer the cries of Abraham’s descendants and deliver them to freedom, also giving them the land of Israel.

Moses was the most humble man on Earth[1], and therefore when God summoned him to lead the Exodus, he replied to God, “Who am I that I should address Pharaoh and take out the Jews?” God then assures Moses He will be with him. Moses then asks what name of God he should use, and God says, “I am, that I am.” God then instructs Moses to gather the Jewish elders and inform them of His plan, and God assures Moses “they will listen to your voice (Exod. 3:18).” God concludes that He knows Egypt’s king will not initially release the Jews, and that He will bring the plagues. Ultimately the Egyptian king will release the Jewish nation, and the Jewish women will ask the Egyptian women for gold, silver and clothes and they will despoil Egypt. This apparently ends God’s address to Moses.

However, we notice that in God’s initial presentation to Moses about how these events will take place, God does not command Moses to use his staff. This is significant.

In the next verse Moses says, “…they [the Jews] will not believe me and they won’t listen to my voice for they will say ‘God did not appear to you’ (Exod. 4:1).”  Moses says this, despite God’s earlier assurance that the Jews would in fact believe Moses (Exod. 3:18). Some Rabbis[2] critique Moses for this disbelief, while Maimonides teaches[3] Moses was merely asking “how” God intended His plan will cause the Jews to accept Moses’ words, as God stated in verse 3:18. (I will soon propose a third possibility.) Nonetheless, God responds, “What is in your hand?” Moses replied, “A staff.” God told Moses to cast it downward. Moses did so, and it became a snake. Moses then fled from the snake. God then told Moses to grab its tail and it returned to a staff. God explained this miracle was “in order that the Jews will believe that the God of the patriarchs appeared to you (ibid 4:5).”  In 4:17 God commands Moses to use this staff to perform the miracles and the plagues[4]. But we must ask, as God already told Moses “they will listen to your voice (Exod. 3:18)” even without the staff, how can God now say that due to the staff miracle, “the Jews will believe that the God of the patriarchs appeared to you”?  The Jews’ belief is independent of the staff’s miracle!

Now, while it is true, as Dani’s father said, God could have ultimately planned Moses to use the staff, regardless of Moses’ apparent initiation of the need, it is equally tenable that God’s instruction to Moses to use the staff was only a concession to Moses and not part of God’s original plan. A few other considerations lead me to this assumption. First of all, after Moses pleads with God to find another emissary and God concedes to allow Aaron to speak instead of Moses, God includes in that concession the statement “And this staff take in your hand with which you will perform the miracles (Exod. 4:17).”  Why is the command to take the staff joined to Aaron’s appointment? Secondly, in verse 4:20 the staff is mentioned again, but now Moses calls it the “Staff of God.”

The Purpose of the Staff

Moses was most humble, viewing himself as no one special. He did not wish leadership. Perhaps Moses’ very humility made him perfect for this role in God’s plan. As God wished to display His greatness to the Egyptians, a humble man would ensure that the focus remains on God, and not allow leadership to corrupt him.

I wish to suggest the purpose of the staff is connected to Moses’ humility. Perhaps God gave Moses this staff to equip Moses with complete confidence. Holding the staff throughout the signs and plagues — the staff that turned into a snake and back again — Moses was thereby emboldened to carry out God’s mission confidently. He would be able to speak with a “voice” of confidence. Perhaps also, God grouped together His concession of sending Aaron with His command to take the staff (ibid 4:17) to say in other words, that both were concessions — “for Moses” — not Pharaoh or others. And Moses’ reference to the staff in 4:20 as “God’s staff” is another way of saying that Moses viewed the staff as a surety from God: Moses’ sentiment of satisfaction that he will succeed.

So Dani, thank you once again for asking me a great Torah question that has lead me to learn new Torah ideas. Together, we are sharing Torah with many other people who will read and learn from this article.

[3] Guide for the Perplexed, book I, chap. lxiii